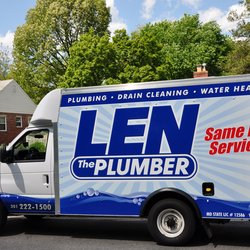 November 2015 – To have missed the expansion of Len The Plummer throughout the Northern Virginia area this year, you must have been at the beach.  In the fall of 2015, Tartan Properties Commercial was hired to find Len its first Virginia location with one edict for the tenant representative: at least 100,000 cars per day had to see their sign.  That led Len The Plumber to sign a long-term deal at 10440 Furnace Road right on Interstate 95.  Before the ink was dry on the lease, Len The Plumber launched its advertising blitz on the region to let customers know there is a new industry competitor in Northern Virginia.  Almost immediately Metro Bus ads and a large Google ad campaign buy swept the region.  Good luck to you, Len The Plumber, but it doesn’t look like you will need it!