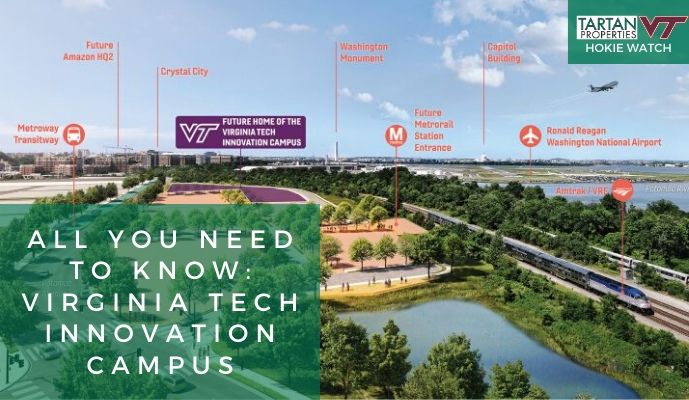 All You Need to Know: Virginia Tech Innovation Campus

The back stories are now starting to come out on how Amazon’s HQ2 landed in Arlington and how Virginia Tech’s $1 Billion Innovation Campus came to fruition in Alexandria, since the November 2018 announcement.  David Baker, the Assistant Director of Government and Community Relations for Virginia Tech, dispelled a myth to a packed auditorium at recent Agenda Alexandria event, that this campus is only being created because of Amazon.  He reported that the university was just beginning a 25-year plan to roll out such a campus and was looking state wide.  It was only when rumors of Northern Virginia being a finalist in the Amazon sweepstakes surfaced that the VT President decided to rapidly move up the timeline.

Virginia Tech announced in June of 2019 the final selection for their new Innovation Campus on the site of what is currently the Regal Cinema just steps from the new Potomac Yard Metro station that is scheduled to be completed in 2022.  This is now being referred to as the southern end of newly branded National Landing.

Here are the fast facts to know about the new campus and the surrounding development:

The goal of this new partnership between Virginia Tech and the Virginia Economic Development Partnership, is to train a new workforce for the 21st Century economy and the incentive package the university is receiving will require them to meet certain benchmarks. The Innovation campus will only offer doctoral and master’s degrees, focused on computer science and software engineering, with heavy focuses on data sciences, analytics and creative decisions, and security and internet policy.  It is the hope of city and state officials that this will be the catalyst for new commercial growth and demand for office space in the city as they work to grow out the intellectual ecosystem of the Patent and Trade Mark Office, the National Science Foundation and now, the VT Innovation Center.

In addition to academic space, the campus will offer incubator space for startups and research development, as well as other office tenants.

According to Technical.ly DC, the first 100 students will enroll in masters programs in 2020, and will then ramp up to 750 master’s degree candidates, as well as doctoral and post-doctoral fellows when the campus is eventually completed.